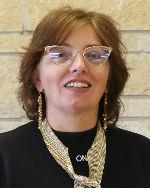 Loreta Kovacic, internationally acclaimed musician, entertainer and teacher, finds inspiration in the multi-cultural environment of her hometown, Houston.  She started her career as a teenage rock star in Croatia, where, aside from actively performing as a classical pianist, she was also known as her country’s first female rock electronic keyboard player.  After emigrating to the USA, she graduated from Rice University with a Doctorate Degree in Music with a Major in Piano Performance.

Houton Public Radio compares the style of her compositions to Eric Satie, and Houston Press notes how she “moves from classical to pop milieus as fluidly as her fingers dance around the ivories”.  Loreta calls her style “Slavic & Western” and she calls herself and her band, the “Texas Slavs”.

Dr. Kovacic performs at a wide range of venues including Carnegie Hall (two solo concerts), Museum of Fine Arts and Contemporary Arts Museum, Discovery Green, and Mucky Duck in Houston.  The music from her many CD’s has been played on the International Space Station and she was nominated for a GRAMMY for her original children’s songs.

Dr. Kovacic, also known as Ms. K has been a music teacher since her teenage years in Croatia. She enjoys teaching these three FINE ARTS subjects equally: PIANO, CHOIR and THEATER.  Many of her students have continued their love of music and theater throughout their lives, grateful for Ms. K’s music and life lessons.