Who was Roy P. Benavidez? Click Here to learn more. 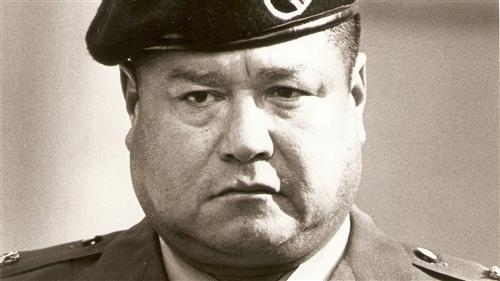 On the morning of May 2, 1968, Mr. Benavidez, a staff sergeant with the Army's Special Forces, the Green Berets, heard the cry ''get us out of here'' over his unit's radio while at his base in Loc Ninh, South Vietnam. He also heard ''so much shooting, it sounded like a popcorn machine.''
The call for aid came from a 12-man Special Forces team -- 3 Green Berets and 9 Montagnard tribesmen -- that had been ambushed by North Vietnamese troops at a jungle site a few miles inside Cambodia.
Sergeant Benavidez jumped aboard an evacuation helicopter that flew to the scene. ''When I got on that copter, little did I know we were going to spend six hours in hell,'' he later recalled.
After leaping off the helicopter, Sergeant Benavidez was shot in the face, head and right leg, but he ran toward his fellow troops, finding four dead and the others wounded.
He dragged survivors aboard the helicopter, but its pilot was killed by enemy fire as he tried to take off, and the helicopter crashed and burned. Sergeant Benavidez got the troops off the helicopter, and over the next six hours, he organized return fire, called in air strikes, administered morphine and recovered classified documents, although he got shot in the stomach and thigh and hit in the back by grenade fragments.
He was bayoneted by a North Vietnamese soldier, whom he killed with a knife. Finally, he shot two enemy soldiers as he dragged the survivors aboard another evacuation helicopter.
When he arrived at Loc Ninh, Sergeant Benavidez was unable to move or speak. Just as he was about to be placed into a body bag, he spit into a doctor's face to signal that he was still alive and was evacuated for surgery in Saigon.
Sergeant Benavidez was awarded the Distinguished Service Cross in 1968, but a subsequent recommendation from his commanding officer that he receive the Medal of Honor, the military's highest award for valor, could not be approved until a witness confirmed his deeds.
That happened in 1980, when Brian O'Connor, the Green Beret who had radioed the frantic message seeking evacuation, was found in the Fiji Islands. Mr. O'Connor told how Mr. Benavidez had rescued eight members of his patrol despite being wounded repeatedly. President Reagan presented the Medal of Honor to Mr. Benavidez at the Pentagon on Feb. 24, 1981. Shortly before Memorial Day 1983, Mr. Benavidez came forward to say that the Social Security Administration planned to cut off disability payments he had been receiving since he retired from the Army as a master sergeant in 1976. He still had two pieces of shrapnel in his heart and a punctured lung and was in constant pain from his wounds.
The Government, as part of a cost-cutting review that had led to the termination of disability assistance to 350,000 people over the preceding two years, had decided that Mr. Benavidez could find employment.
''It seems like they want to open up your wounds and pour a little salt in,'' Mr. Benavidez said. ''I don't like to use my Medal of Honor for political purposes or personal gain, but if they can do this to me, what will they do to all the others?''
A White House spokesman said President Reagan was ''personally concerned'' about Mr. Benavidez's situation, and 10 days later the Secretary of Health and Human Services, Margaret M. Heckler, said the disability reviews would become more ''humane and compassionate.''
Soon afterward, wearing his Medal of Honor, Mr. Benavidez told the House Select Committee on Aging that ''the Administration that put this medal around my neck is curtailing my benefits.''
Mr. Benavidez appealed the termination of assistance to an administrative law judge, who ruled in July 1983 that he should continue receiving payments. When President Reagan presented Mr. Benavidez with the Medal of Honor, he asked the former sergeant to speak to young people. Mr. Benavidez did, visiting schools to stress the need for the education he never had.
Born in South Texas, the son of a sharecopper, Mr. Benavidez was orphaned as a youngster. He went to live with an uncle, but dropped out of middle school because he was needed to pick sugar beets and cotton. He joined the Army at 19, went to airborne school, then was injured by a land mine in South Vietnam in 1964. Doctors feared he would never walk again, but he recovered and became a Green Beret. He was on his second Vietnam tour when he carried out his rescue mission.

Over the years, fellow Texans paid tribute to Mr. Benavidez. Several schools, a National Guard armory and an Army Reserve center were named for him. But he did not regard himself as someone special. 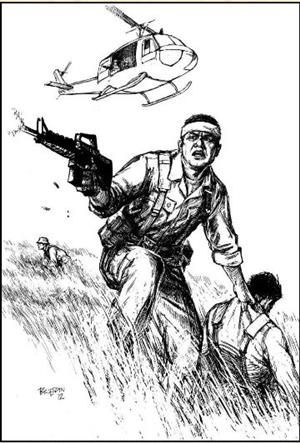 ''The real heroes are the ones who gave their lives for their country,'' Mr. Benavidez once said. ''I don't like to be called a hero. I just did what I was trained to do.''