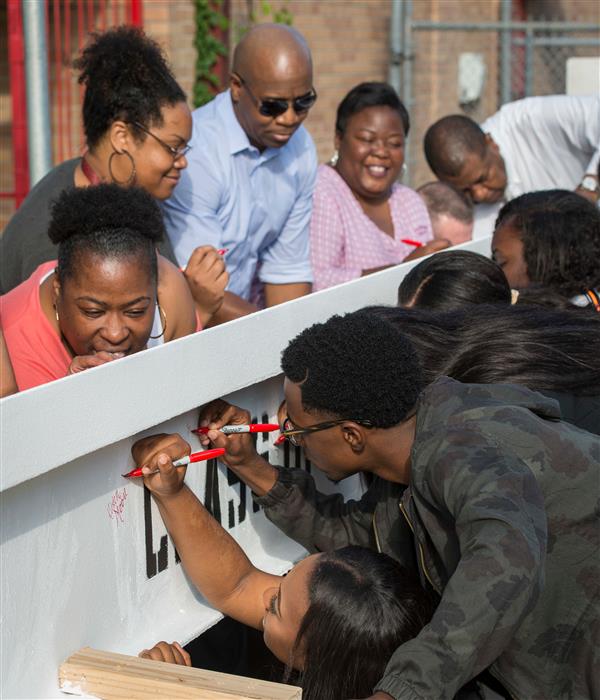 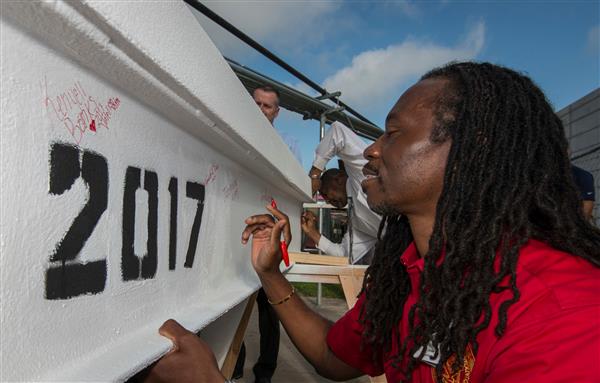 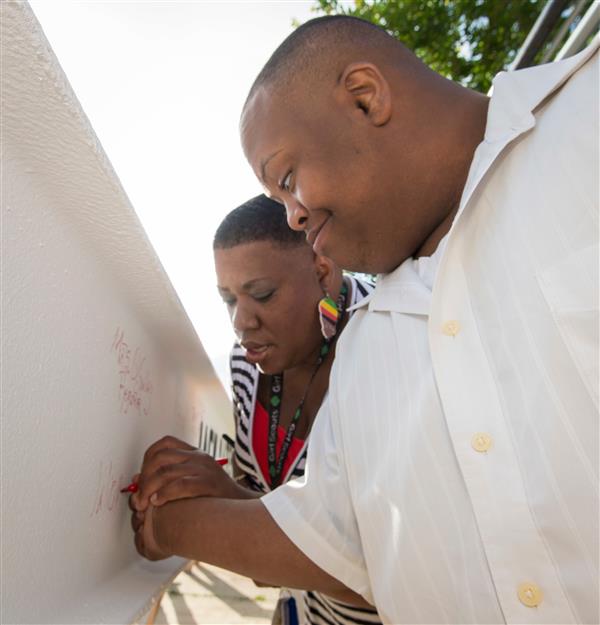 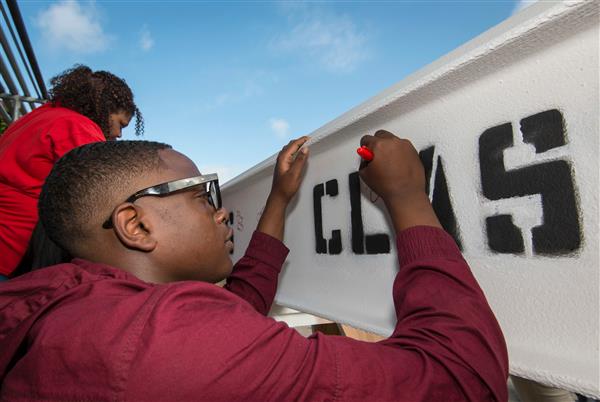 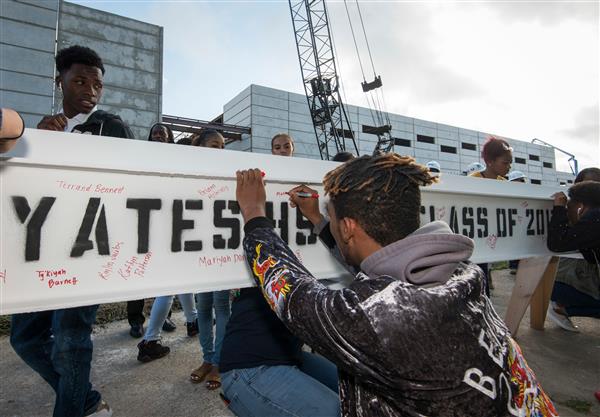 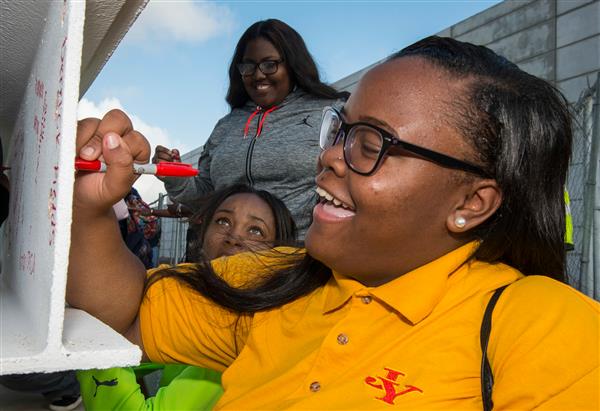 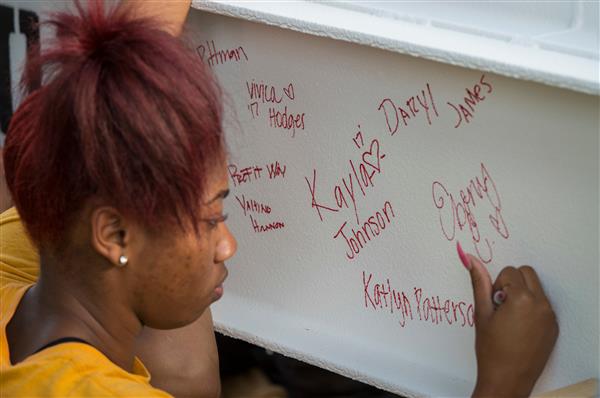 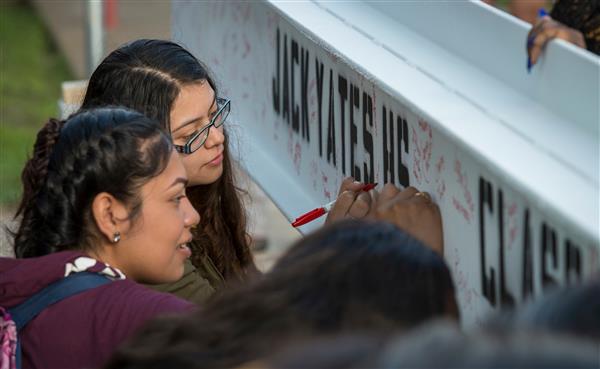 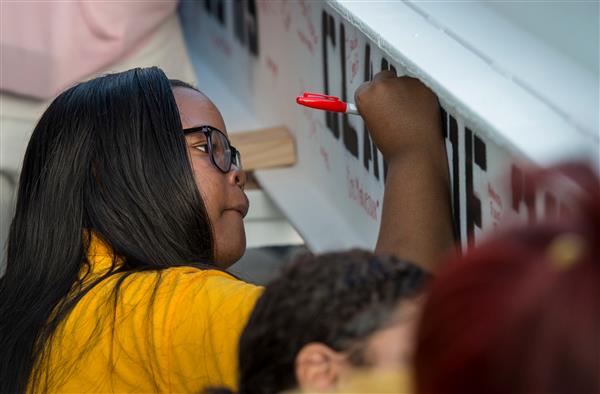 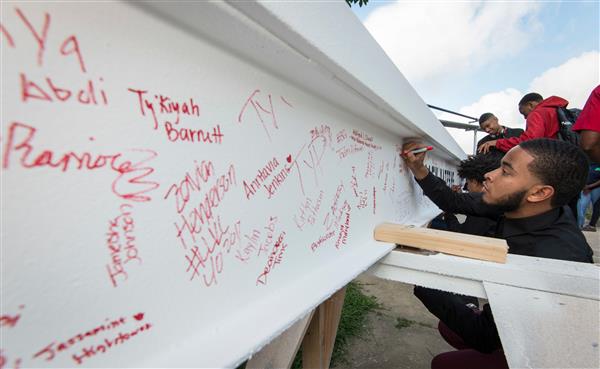 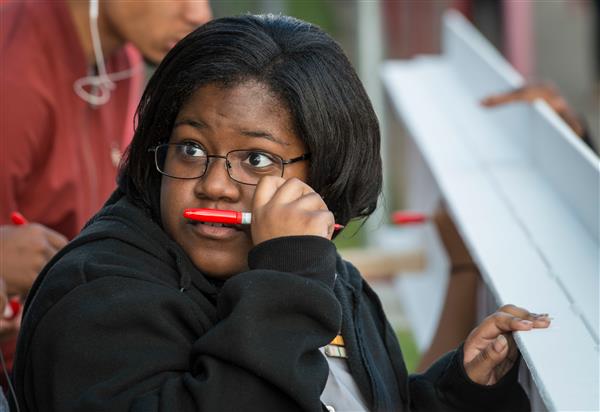 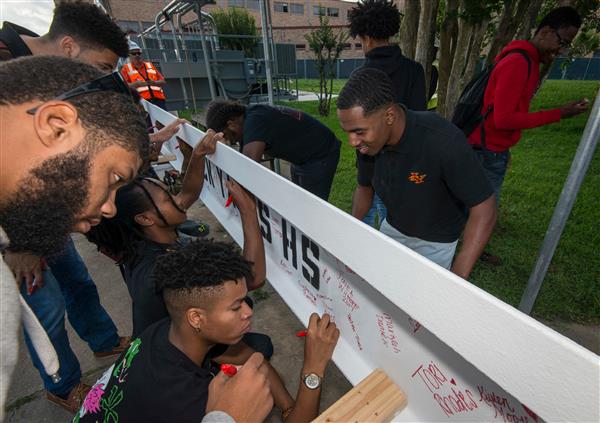 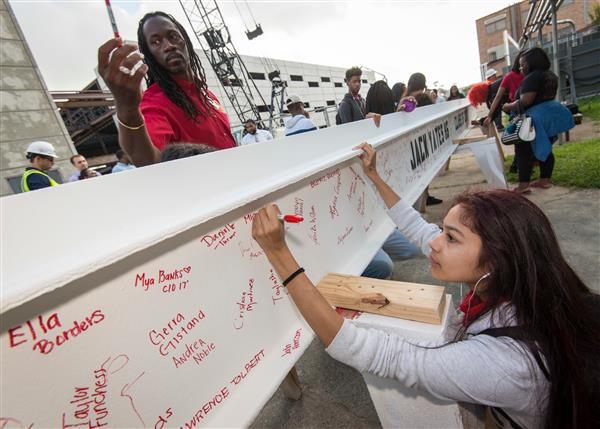 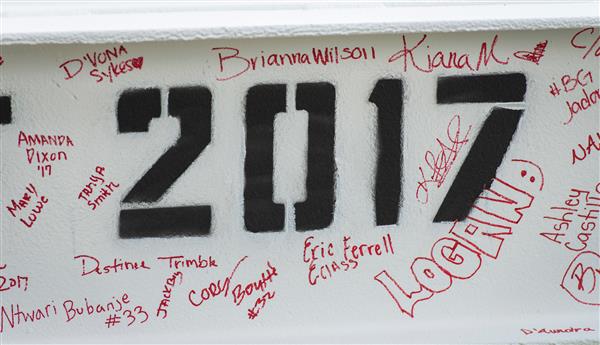 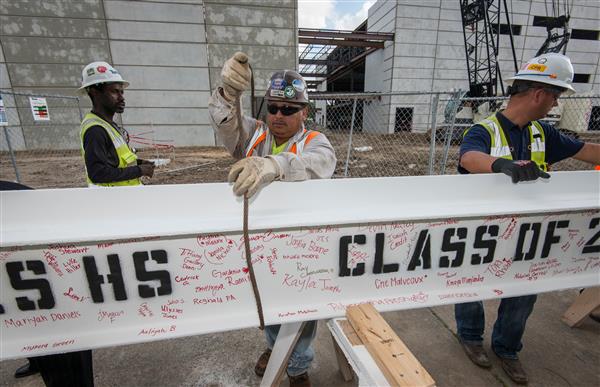 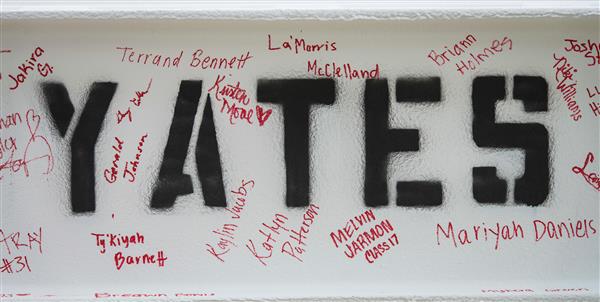 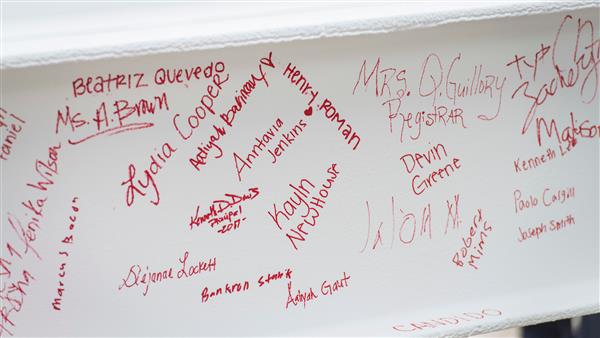 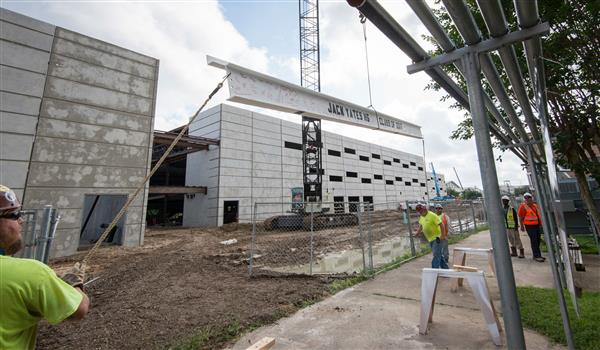 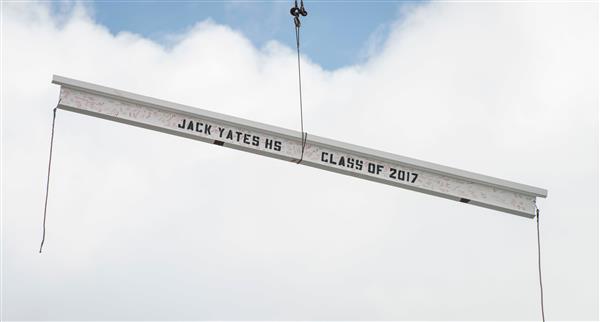 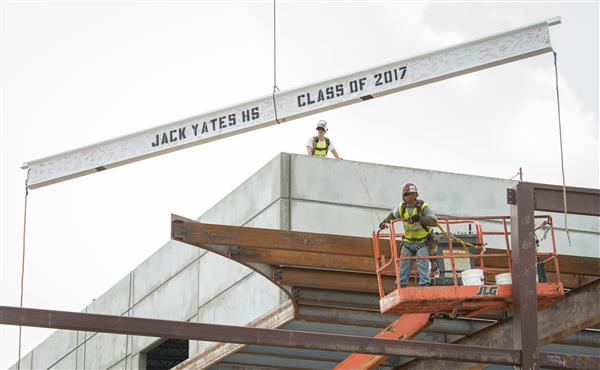 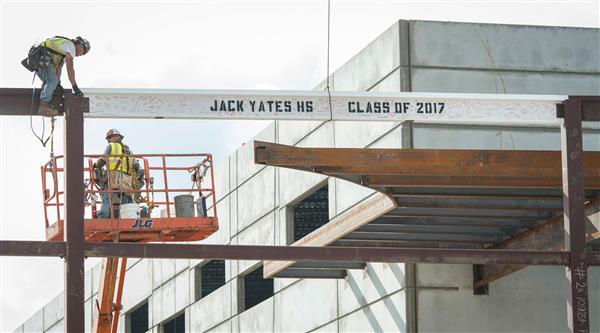 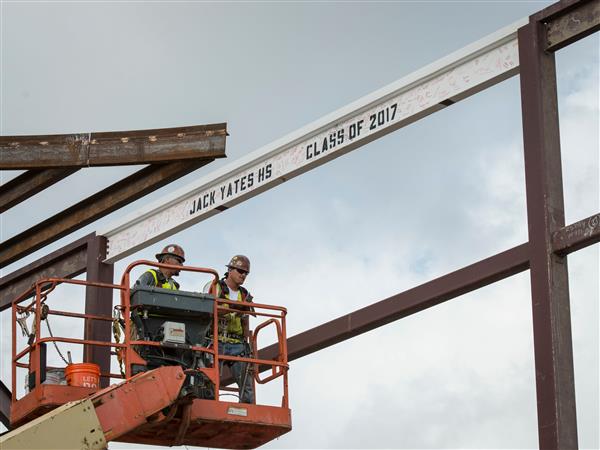 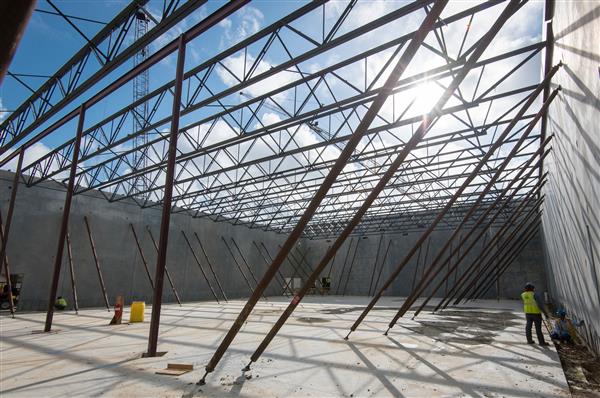 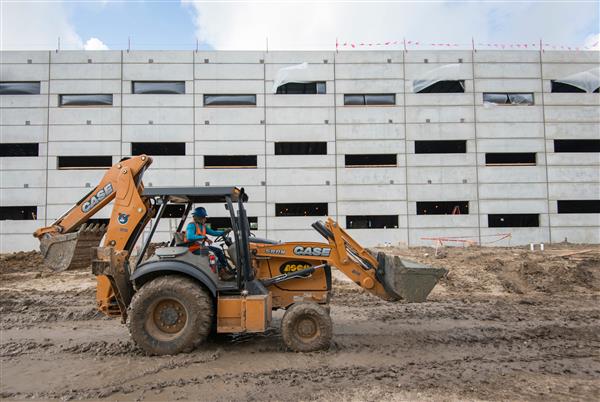 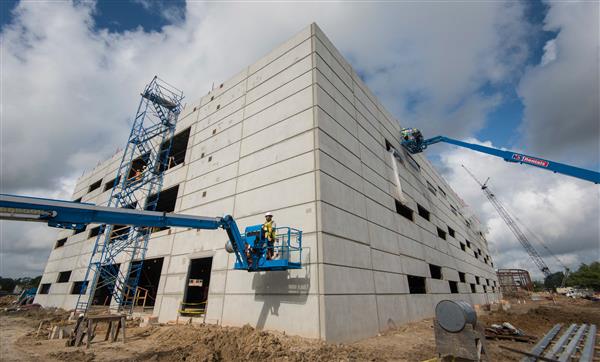 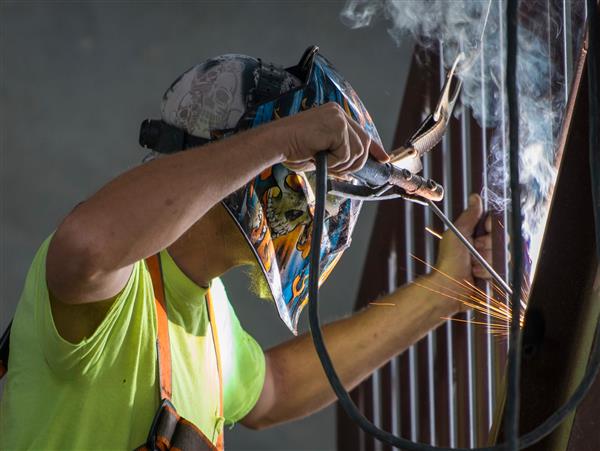 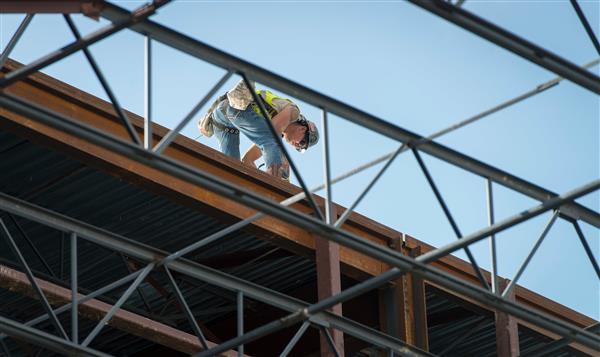 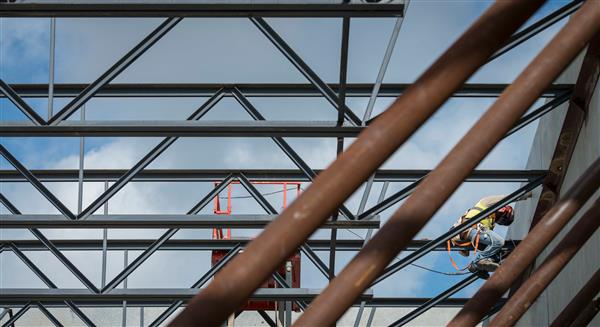 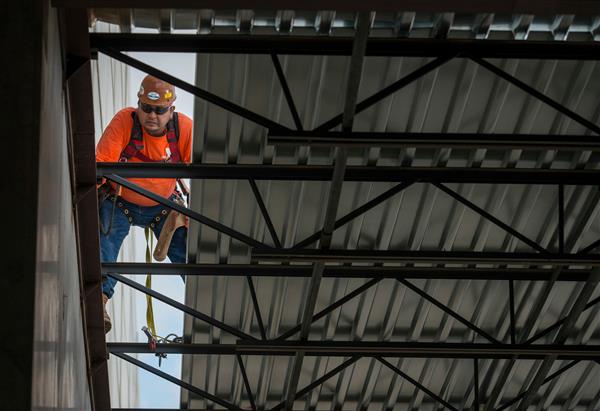 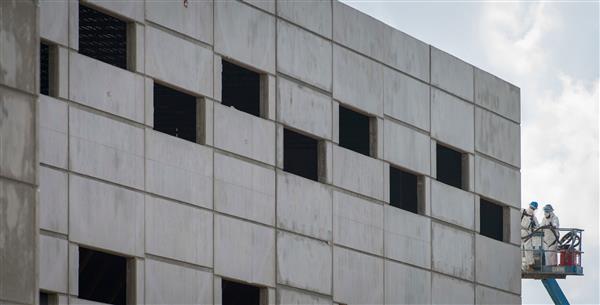 The Lion’s Den at Jack Yates High School roared with excitement as the graduating Class of 2017 scribbled their signatures on the final steel beam to be erected in the construction of their new school.

Once all seniors had signed, they joined with school staff to watch as the beam was hoisted into the air and placed in its new home — the auditorium. The beam will be installed and left exposed, showcasing the signatures from the class of 2017.

“The kids were concerned that they weren’t going to have any history with the new school since they’ll be graduating in May,” said Yates Principal Ken Davis, who worked with the construction staff to surprise the students with the informal ceremony. “We told them that we were going to sign the beam — a little bit of history about you will go into the new building.”

The $59.4 million project, which is a part of the voter-approved 2012 bond, is currently about 20 percent complete. The exterior concrete walls have gone up, and both the structural steel and roofing are underway.

The new building will accommodate 1,300 to 1,500 students. It will feature a grand entryway with large windows connecting the front and back entrances and flexible learning spaces accommodating the school’s communications and maritime magnet programs.

Other key features include a three-story academic wing with flexible core learning centers and a one-story, high-volume performance wing with an auditorium, spaces for fine arts and JROTC, a gymnasium, and athletics area.

For Yates senior Krevianyana Waring, the day was bittersweet. While she is excited about the progress, she also has fond memories of her time in the current building.

“It’s a good feeling, but sad at the same time,” Waring said.

Senior D’shomonique Johnson said she is sad she won’t be able to experience the new building, but said she is excited for those students coming after her.

“Even though I’m leaving, I want my friends to be here to see the new building,” Johnson said.

Construction is underway at roughly three dozen campuses, which is more activity than any other time in district history. Almost 50 percent of bond projects will be complete and open to students by the end of this summer. Once all work is complete, HISD will boast of one of the most modern portfolios of urban high schools in the country.