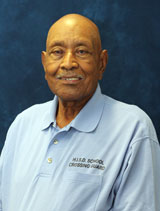 He joined Team HISD in 1997, just three years after retiring from a long career with American Freight Lines, for whom he was a truck driver.

Today, Pete is still going strong at the age of 79, and he is known around campus for both his reliability and his cheerful demeanor as he shepherds students and their caregivers to and from school.

Originally from a tiny town in northern Louisiana called Walsh, Pete moved to Houston in 1952 with his late wife to find work and start a family. All six of their children—three sons and three daughters—attended HISD schools, and all six of them graduated from Ross Sterling High School.

Pete currently lives in Houston, and when not working, he enjoys fishing, taking cruises in the Caribbean, and attending his son’s church.

“Mr. Pete is extraordinary,” says Fondren Elementary School Principal Michael Walker. “To say that he is loyal or faithful is an understatement. He even killed a snake one time! But it’s not like he walks around saying, “Yeah, I am quite the crossing guard.” He is very unassuming. He really cares about the students and he is part of the fabric of our school.”

“Mr. Pete is not only concerned with the safety of students as they cross the street, but also as they are waiting to cross the street,” added former Fondren Nurse Carolyn Smith. “The grass on the corner of West Orem and Carlsbad had grown rather tall, and Mr. Pete took it upon himself to cut and edge that area—using his own equipment—after the students had gone home, so that they wouldn’t have to keep standing in the weeds. And that’s not part of his job description.”

“I have worked with Mr. Pete for the past eight years, and he is a true gentleman,” explained Crossing Guard Team Leader Oscar Banks. “All of our guards are very conscientious about the safety of the kids, but Mr. Pete just takes things a little further. That’s why he took that weed whacker to the grass on the corner. He’s also a very good-natured person, and the students respect him.”