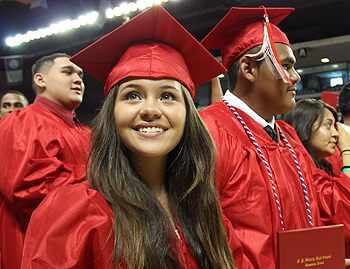 Teachers, family and friends of HISD students cheered on loved ones as they received their diplomas during recent commencement exercises.

PHOTOS AND VIDEO:
See a photo gallery of 2012 graduation ceremonies
See video of some of the pomp and grad celebration

More than 9,000 seniors will graduate from HISD high schools in the coming days. So far, HISD seniors have been offered more than $172 million in college scholarships, a record-breaking amount that surpasses last year’s total by more than $40 million and the total for the Class of 2012 is still growing.

Almost 90 percent of HISD’s graduates have been accepted into college and half of these students were accepted into a 4-year university. In fact at Davis High School, for the first time in the school’s history, the entire graduating class applied and got accepted into a two or four year college or university. Plus, the district currently boasts the highest graduation rate and the lowest dropout rate ever.

These are all results of the district’s efforts to ensure every student is prepared for college and one of the reasons HISD’s high schools continue to be among the nation’s best.

Twenty-one HISD high schools recently earned recognition in the Washington Post High School Challenge, a list of 1,800 schools representing the top 9 percent in the nation when it comes to preparing graduates for college. Only 125 Texas high schools made the list, and HISD campuses – Carnegie Vanguard, Eastwood Academy, and DeBakey High School for Health Professions – represent three of the national top 100.

In addition, HISD high schools also occupy 9 out of 1,000 positions on Newsweek’s list of America’s Best High Schools. Only 86 Texas high schools made the Newsweek list.

These national rankings are a result of the district’s Advanced Placement initiative that began in 2009 to ensure all HISD students have access to at least 15 college-level AP courses in every high school.

Last year students earned a score of 3 or higher, which is the score most colleges require for course credit, on 6,657 AP exams, which is a 35 percent increase from 2009.

Such strong AP initiative is also one of the reasons HISD is among the four finalists for the Broad Prize for Urban Education, the nation’s most prestigious education award which recognizes the top urban school district in America for its strong academic achievement and narrowing the achievement gap.

In keeping with the district's mission of creating a college-bound culture in every school, HISD opened the Energized for STEM Academy in 2008 in an effort to help students earn college credits that will prepare them for postsecondary academics as well as technical careers in a variety of fields. On June 2, the inaugural Energized for STEM Academy Class of 2012 will be graduating with college credits and have all been accepted into college or the United States Military and were awarded scholarships totaling nearly $2 million. 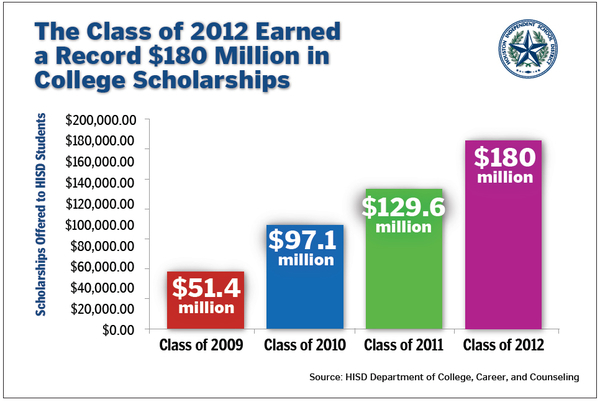