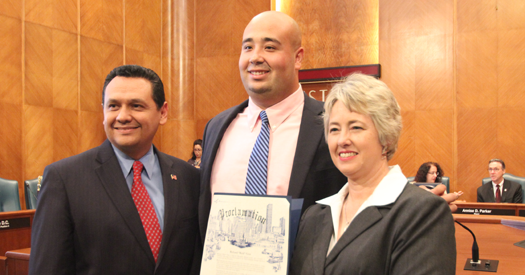 The proclamation was part of the mayor’s Hispanic Heritage Education Award in recognition of Cruz’s EMERGE Fellowship program. The program—founded at Chavez High School—helps low-income, first-generation minority students get into top-notch colleges such as Harvard, Dartmouth, Tufts, and Oberlin with full scholarships. The program has expanded from Chavez to Furr High School, Sharpstown High School and Eastwood Academy.

Cruz said he is proud of the students’ accomplishments in the program and encourages other teachers to get involved in similar efforts to promote achievement. He noted that the EMERGE program has been run entirely by HISD teachers who have volunteered their time.

“Just do it. If you want to service kids in a special way, there is nothing holding you back,” Cruz said. “One of the great things about HISD is there are so many supportive teachers.”