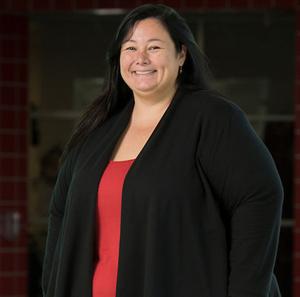 Melissa Matsu, Employee of the Month for November, is the instructional coordinator at Carnegie Vanguard High School. She first came to the district in 2000, and she served as a teacher at Lee High School and Carnegie Vanguard before assuming her current position in June 2012.

As the instructional coordinator at Carnegie, Matsu is responsible for welcoming each year’s freshman class and ensuring that their transition from middle school is as smooth as possible. This year, she also served as Carnegie’s primary liaison between school administrators, bond office representatives, and all of the builders, architects, and subcontractors who were finishing construction on the brand-new facility, which opened last fall. Matsu also serves as a chaperone on students’ international trips during the summer. So far, she has accompanied students to Costa Rica, Belize, Italy, Spain, France, Australia, and Japan.

Matsu is a member of the Shared Decision Making Committee, a member of the PTA/PTO, and the school’s unofficial social media coordinator, answering questions on Facebook and maintaining an Instagram account that she created. She was named an Exemplary STEM Teacher in 2007 by the Academy of Medicine, Engineering & Science of Texas, and she was accepted into the Toyota International Teacher foreign-exchange program in 2005 for a two-week trip to Japan. Matsu also provides professional development to other educators as a master science teacher through Rice University’s Excellence in Secondary Science Teaching program.

A native Houstonian, Matsu now lives in Sugar Land with her husband of 17 years. When not working, she enjoys traveling, playing with her dogs, and volunteering through the Junior League of Houston.

“I have worked with Ms. Matsu for eight years, and she is nothing short of amazing,” says Principal Ramon Moss. “She is so dedicated that even though she had already been in a new role for months, she came in almost every day over the Christmas break to help the new magnet coordinator process all 1,300 applications and schedule approximately 300 gifted and talented tests for the coming school year. She also helped interview between 35 and 40 candidates for various positions, and gave daily magnet tours during Magnet Awareness Week.”

“Ms. Matsu has been juggling dozens of roles,” adds teacher Kris Casperson. “She has been the glue that kept our campus together this year. She inspires the rest of us to keep working our hardest, because at the end of the day, everything we do is for the students.”

“The thing that makes Ms. Matsu special is not her creativity, her amazing teaching skills, or even how smoothly she helps to run the school,” explains Carnegie Vanguard junior Raquel Douglas. “What sets her apart is the passion that she has about every aspect of her students’ lives. She fosters our success not only academically but also socially, emotionally, and mentally. We are all better people because of her.”