Martha Moreira, Employee of the Month for December, is a library assistant at Bellaire High School. She first came to the district in 2000 as an assistant manager in the school’s cafeteria but accepted her current position in 2004 at the encouragement of both her principal and her second-oldest son, César.

As the library assistant at Bellaire, Moreira is responsible for checking out titles, setting up computer labs, reshelving books, lending audio-visual equipment, and answering general questions. She also served as the interim librarian during the spring of 2011, when the regular librarian was out dealing with an illness in the family. 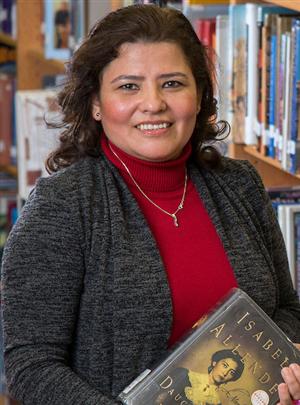 Moreira is the proud parent of four boys, all Bellaire graduates. Currently she is helping her son César teach an evening English as a Second Language class for Bellaire parents. She also helps coordinate the school’s annual holiday party for Texas Children’s Hospital patients.

Moreira fled her native country of El Salvador in the mid-1980s to escape the civil war going on there at the time. She initially settled in Virginia but moved to Houston in 1998 when her husband was offered a better job opportunity. When not working, Moreira enjoys reading, cooking, and spending time in nature.

“Bellaire is a large school,” said Principal Mike McDonough, “and we operated with two librarians until one retired a few years ago. Our remaining librarian, Mr. Casteel, largely credits Moreira’s assistance for helping him to function as the sole librarian here.”

“I have supervised employees in both the private and public sector over the past 30 years,” said librarian Carl Casteel, “and I can state unequivocally that Martha is the finest of them all. She sees what must be done and does it, and because she anticipates problems, she short-circuits others from developing. This is a critical skill, especially during high-use periods. I could not manage the library without her.”

“When our librarian was out last spring, Martha really stepped up to the plate,” said Assistant Principal Michelle Shoulders. “She kept everything going, mostly because of her optimism and can-do attitude. Martha is such a great resource. She always makes herself available to help, and she is a delight to work with.”