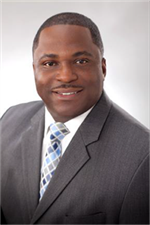 Dameion J. Crook is an educator with over 17 years of experience working on behalf of students in the Houston community.  Dr. Crook is the founding principal of Mickey Leland College Preparatory for Young Men (Leland Prep) which began serving young men in 2011.  Under Dr. Crook’s leadership, Leland Prep works to develop the full potential of young men by fostering an educational environment that encourages critical thinking, inspires confidence, and promotes the social development necessary to create productive citizens and successful leaders.  Leland prep is nationally ranked as the 38th most challenging high schools in the nation.

Dr. Crook is a proud Texas Southern University Tiger.  He graduated from Texas Southern in 1997 with a Bachelor of Science in Biology and a minor in Chemistry.  As an undergrad, Dr. Crook was honored for his academic achievement with membership in Beta Kappa Chi, Honor Society.  He returned to Texas Southern to pursue a Master of Science in Biology, which he earned in 2004.  Last year, Dr. Crook earned his Doctorate in Educational Leadership and Policy Studies from the University of Houston.  His graduate research focused on the efficacy of the single-gender model in addressing achievement gaps in minority boys.  While at the University of Houston, Dr. Crook was recognized as a STAR scholar and served as President of his graduate school cohort.

Dr. Crook began his career as an educator as an adjunct Biology Professor in 2004 at his alma mater Texas Southern.  In 1998, he began working as a science teacher in the Houston Independent School District.   Soon after Dr. Crook was promoted to an Assistant Principal where he served the students at Walnut Bend Elementary School and a short time after that he became the principal at E.O. Smith Educational Center.  Simultaneously, Dr. Crook continued his work on the collegiate level where he has worked as an adjunct professor in the Natural Science Department at Houston Community College where he taught anatomy and physiology for 10 years.  Dr. Crook has also served as an adjunct professor at San Jacinto College.