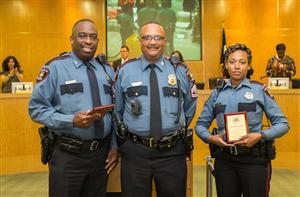 Willie Demby and Staniesha Jones, Employees of the Month for November, are members of the HISD Police Department who serve as campus officers at Yates High School. In what may well be a first for the district, they were nominated and selected for recognition together, as they serve as partners on the force and function as a team.

“Officers Demby and Jones definitely work well together,” said Sergeant Antony Davis. “They are always visible out in the hall, interacting with staff and students. Establishing that rapport is critical to the success they have, and the level of trust people have in them. It is impossible to nominate one without the other.”

Officer Demby joined the district in 2009 and was named the HISD Police Department’s Employee of the Year in 2013–2014. He is a member of the Texas Municipal Police Association and holds a Texas Association Sports Officials license. In his spare time, Officer Demby enjoys traveling, watching sports, and refereeing at high school football games. He lives in Sugar Land with his wife of 14 years, Rhonda.

Officer Jones has been a member of Team HISD since 2012. She was honored alongside Demby as Employee of the Month by the HISD Police Department in October 2014. Officer Jones is a native Houstonian who attended Peck and River Oaks elementary schools and Fondren Middle School before graduating from Madison High School. In her spare time, Officer Jones enjoys watching sports and spending time with her two children. She is a member of the Texas Municipal Police Association and Order of the Eastern Star, and lives in Houston.

“Both Officers Demby and Jones are highly respected by the student population,” said Sergeant Dwight Moore. “In June, they even apprehended a murder suspect, because he said he would only turn himself in to them. He also requested that they be present during his interview process, as they were the only two officers he felt he could trust.”

“Both Officer Demby and Officer Jones are amazing,” added Yates Principal Kenneth Davis. “Because they have such strong ties to the community and our students, their presence prevents unwanted disturbances both on and off campus. They support the legal system and encourage students to do the same. They are true guardians of the badge.”