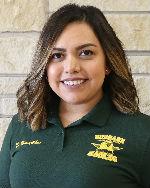 Ms. Rodriguez was born in Weslaco, TX. However, she was raised in the small town known as “The Heart of the Valley”, Donna, TX. Ms. Rodriguez attended elementary and secondary school at Donna ISD, graduating in the top ten percent of her class at Donna High.  After high school, she went on to attend the University of Texas-Pan American where she was given the opportunity, in her junior year, to travel with fifteen other students from around the U.S. to an 8-week missions trip to Ghana. In 2013, she graduated with a double major in Spanish and Mexican-American Studies.

The teaching experience she experienced in Ghana inspired Ms. Rodriguez to pursue a career in teaching. Ms. Rodriguez taught at Donna ISD for five years, focusing on empowering English language learners to see their potential and shift their perspective regarding education. It was a challenge but not an impossibility. The evidence lies in that every year, her group of students demonstrated that their language barrier was not an excuse, but rather a tool to grasp the content. In the 2018-2019 school year, Ms. Rodriguez was able to get ninety-two percent of her ESL team to pass their 8th grade STAAR Reading.

After dedicating five years to her own community, she realized that it was time for a challenge to grow both personally and professionally. Ms. Rodriguez decided to leave what she’s known as home for all these years to move to Houston, TX. Now, she finds herself working at the best middle school in HISD and looking forward to what is to come!