A combined $200,000 commitment from the Laura and John Arnold Foundation and the Houston Independent School District will allow 11,000 area students to receive the vision screening and eye examinations they need in the coming year. 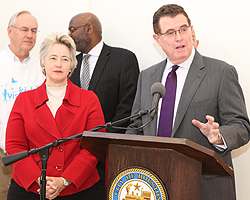 Houston Mayor Annise Parker publicly thanked the Arnold Foundation and HISD for the contribution on Monday, March 5, during a visit to the city's Good Neighbor Health Care Center in The Heights.

"This is truly a case of many hands sharing the load," Mayor Parker said of the See to Succeed program, which has been providing free eye examinations and prescription eyewear for Houston-area children since 2007. Established by OneSight, a Luxottica Group foundation, See to Succeed partners include Berkley Eye Center, Essilor Foundation, University of Houston Eye Institute, Wal-Mart, Eye Care for Kids, Kids Vision for Life, San Jacinto College, and HISD.

"See to Succeed fills a critical void in our city's schools. Studies show that a quarter of all U.S. school-aged children have vision problems significant enough to hinder their learning and school performance," Dr. Grier said. "I am grateful to the Laura and John Arnold Foundation for partnering with HISD on a combined $200,000 gift to serve 11,000 more students through this valuable program."

"This is unique across the country for the city and school district and community to come together to put glasses on our children," Whitmire said.

At the end of the eye screening process, students have the chance to pick through dozens of designer eyeglass frames to choose the ones they like.

Cecilia Saavedra, a third-grader at HISD's Coop Elementary School, was among dozens of students to receive their first pair of glasses on Monday. She tried on several frames before zeroing in on a pair of red and black Armani frames.