Schools are often considered the heart of a neighborhood and in recent years the community around Furr High School has been transformed. The violence that was once common has subsided and students recently held Civility in the Park, an event to celebrate the new spirit of community that exists in their corner of the east side. 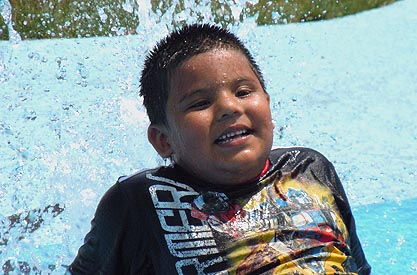 Click the image above to see photos from Civility in the Park.

“When I first came here, there were 14 identified gangs on this campus,” said Furr High School Principal Bertie Simmons. “We have brought the whole community out here to celebrate the civility that now exists on this side of town.”

The event was held just down the street from Furr at Herman Brown Park.  “The school is not isolated and is part of the greater community,” Simmons said. “Now we have a whole community that is safe. At one time, there were so many killings over here that we could not have done this.”

Musical performances, face painting, dancing and food were featured at the free event. In the spirit of the gathering, participants received civility passports and were asked to note when they saw someone participating in a civil act and approach that person to thank them.

As part of a broader effort to encourage civility, 10 students from Furr High School are in Washington, D.C., to meet with senators and representatives to urge them to reach across the aisle to work together on education, immigration and the economy.