Ghoulish Creatures Getting Out the Vote

With Halloween right around the corner, things are getting a little spooky around the district. Photos of zombies in front of various HISD high schools are popping up all over Twitter and Facebook. In addition to their frightening appearance, the ghoulish creatures are holding “Zombies Vote Early” signs.

Actually, if you look closely, you’ll notice the zombies are some of HISD’s most popular principals doing their part to encourage the living to vote early, from the top of the ballot to the very bottom, where the HISD schools bond can be found. Take a look at the photo gallery and see if you can guess what HISD principal is hiding behind their zombie mask.

On Halloween, students from the High School for the Performing and Visual Arts and Lamar High School will be holding their own “Zombie Walk” to encourage Houstonians to vote early. You can watch them shamble from the corner of Montrose and West Gray to the Metropolitan Multi-Services Center at 1475 West Gray from 4 to 4:30 p.m. on Wednesday, Oct. 31. Once at the early voting site, students will hand out “Zombies Vote Early Stickers” to voters and will perform a zombie flash mob to the Michael Jackson hit “Thriller” at 4:30 p.m.

“Zombies and zombie costumes are all the rage right now with the teens for Halloween, so we figured this might help motivate them to vote and to get their parents to vote,” said Davis Principal Jaime Castaneda. Castaneda even went a step further and performed a special dance routine with the Davis cheerleaders while he was dressed up as a zombie.

“I have no problem embarrassing myself if it helps get out the vote and encourages folks to finish the ballot,” said Castaneda.

Click on the map below to see where these zombies were spotted. 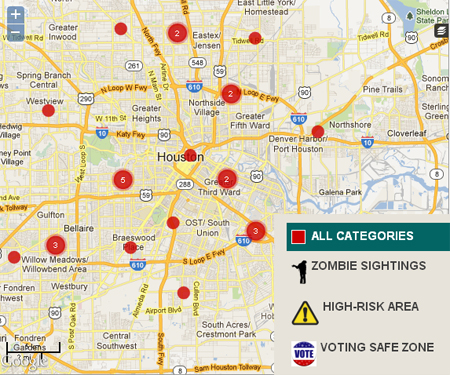