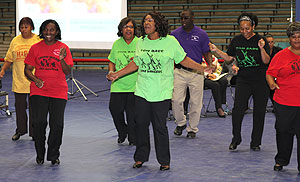 The Tom Bass Line Dancers (made up exclusively of senior citizens from the Wheeler Avenue Baptist Church) were one of the featured performers at the 2012 Parent Involvement Day celebration, whose focus this year was grandparents.

According to the 2010 Census, roughly 13 percent of all Texas grandparents play some role in bringing up their grandchildren. In the Houston area, that translates to about 58,000 grandparents living with children under the age of 18, with 23,000 of those serving as their primary caregivers.

That’s one reason HISD made grandparents the focus of its fifth annual Parent Involvement Day, which took place Nov. 16 at the Delmar-Tusa Athletic Complex.

“In more and more instances, grandparents are being called upon to raise their children’s children, said Kelly Cline, HISD’s Senior Manager of Parent Engagement. “Many of them probably thought their child-rearing days were long behind them, so we want to honor their sacrifice and acknowledge the important role they are playing in the lives of these young people.”

AARP Associate Texas Community Relations Director Marla Turner, who served as the keynote speaker at the event, attributed the increase in older adults taking care of young children primarily to the economy.

“Right now, most parents have to work,” she said, “so grandparents are stepping up more and more. In other cases, you have parents who are deceased, incarcerated, or struggling with substance abuse, so it’s grandparents who step in to take care of their children.”

HISD’s Department of Parent Engagement launched a series of info sessions dubbed the “Grandparents Prep Academy” this fall in recognition of how many grandparents are acting in the role of parents.

The first session took place at the Hattie Mae White Educational Support Center on Oct. 24, and included an overview of HISD and the bond referendum. Subsequent sessions have been scheduled at the same location for Dec. 4, Feb. 5, and May 2, from noon until 2 p.m.

Grandparents can also find community resources at a number of places, including the AARP website and the Harris County Area Agency on Aging.