The students were chosen earlier this semester from the ranks of all the graduating seniors in HISD's 25 JROTC programs. All were promoted to cadet colonel, which is the highest rank attainable in the JROTC program.

The selection board members for this year's competition consisted of cadets from Texas A&M University. Cadets received points based on their scholastic standing and participation in extracurricular activities. Cadets were also awarded points at the competition for their proficiency on the Military Qualification Test, an oral presentation, a personal evaluation consisting of military courtesy, knowledge of current events, appearance, knowledge of geography, and an evaluation of first-aid techniques such as lifesaving, bandaging, and transporting sick and wounded victims. 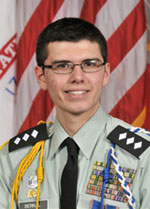 Cadet Colonel Bernal served as the Cadet Battalion Commander for HISD's 15th Army JROTC Battalion at the High School for Law Enforcement and Criminal Justice. He is ranked first out of 123 graduating seniors, with a grade point average of 4.43, and is the school's valedictorian. He served as class president as a sophomore and vice president of the National Honor Society as a senior, and now is a member of the Student Council. Cadet Colonel Bernal attended the Junior Cadet Achievement Program at Texas A&M University. He has been a member of the Color Guard Team for four years and the Academic Team for three years. Cadet Colonel Bernal has been awarded the Superior Cadet medal for the last three years, the Military Order of the Purple Heart, and the Military Order of World Wars Medal. He will attend Texas A&M University and major in nutritional 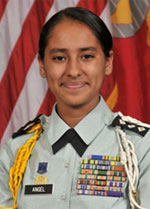 Cadet Colonel Angel ranks in the top eight percent of her class and has a GPA of 4.4. She has served in a number of leadership positions in the battalion, including squad leader, platoon sergeant, platoon leader, company executive officer, and battalion commander. She is an International Baccalaureate diploma candidate and a member of the National Honor Society. For the past three years, she has been a member of the armed, non-service weapon drill team and last year was a member of the female color guard. Currently, she serves as the female color guard commander. Outside of JROTC, she is a member of the Key Club and Young Ladies of Distinction. Cadet Colonel Angel has been accepted to Texas A&M University, where she plans on majoring in biology. Her long-term plan is to enter medical school. 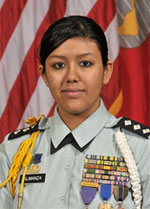 Cadet Colonel Almanza served as the Cadet Battalion Commander for HISD's 14th Army JROTC Battalion at the E. L. Furr Senior High School. She is ranked third out of 235 graduating seniors with a grade point average of 4.18. She also is a member of the National Honor Society, the Debate Team, the Principal's Court, Church Dance Team, and Houston Leadership for Tomorrow. Cadet Colonel Almanza attended the Junior Cadet Accessions Program at Texas A&M University and she has been a member of Furr's Non-Organizational Color Guard team for two years and the Non-Service Weapon Drill Team for two years. Cadet Colonel Almanza has been awarded the Superior Cadet medal for the last two years as well as the Military Order of the Purple Heart, the American Legion Award for Military Excellence, the Military Order of the World Wars, Veterans of Foreign Wars, and the National Sojourners award. Cadet Almanza will attend Texas A&M University and major in political science. 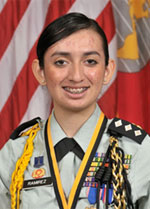 Cadet Colonel Ramirez is a senior with a 3.3 grade point average at the Sam Houston Math Science and Technology Center. She is the treasurer for Tigers Against Drugs and a member of the Golden Knights female drill team. Cadet Colonel Ramirez has also received numerous awards while participating in the University Interscholastic League. She plans to attend The University of Houston and pursue a career in education. 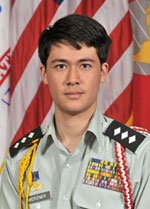 Cadet Colonel Werzner has a 4.23 grade point average. This past school year, he served as the Battalion Operations Officer at Bellaire. He is the president of the National Honor Society and the Science Fair, and is treasurer for the German National Honor Society. Cadet Werzner has also served as the battalion public information officer and as platoon sergeant. He was a member of the Drill Team and has competed on the Academic Bowl Team for two years. Cadet Werzner spends much of his free time as a member of the 1st Texas Volunteers, helping to maintain and restore the Battleship Texas for the Texas Parks and Wildlife Department. He will attend the University of Texas at Austin to study petroleum engineering. 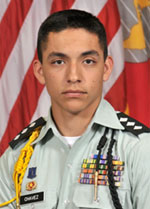 Cadet Colonel Chávez served as the Cadet Battalion Commander for HISD's 17th Army JROTC Battalion at G.C. Scarborough High School. He is ranked sixth out of 147 graduating seniors with a grade point average of 4.13. He serves as president of the National Honor Society and Student Council, and he is a member of the National Hispanic Institute, the JROTC Fitness Team, the varsity football team, the baseball team, the swim team, and the golf team. He has also been active in the Mickey Leland Internship Program in Israel, and as a ninth-grade mentor and Little League football/baseball coach. Cadet Colonel Chávez has been awarded the Superior Cadet Medal for the last three years, and has placed in the Cadet Leader Evaluation Board competition each year. He will attend the United States Naval Academy, where he will study aerospace engineering. He aspires to serve in the U.S. Marine Corps as a fighter pilot.
Copyright © 2002-2022 Blackboard, Inc. All rights reserved.